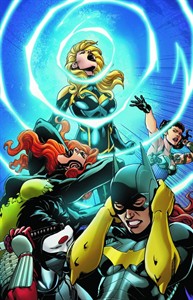 NM Price:
$2.99
Release Date:
3/21/2012
Issue not yet rated - You rated this a 0
Previous Issue Next Issue
Issue description
Writer: Duane Swierczynski
Artist: Jesus Saiz
Go ahead. Skip this issue. You'll only be missing 20 pages of insane, wall-to-wall action as the Birds of Prey finally catch and unmask the elusive mind-controlling villain known as 'Choke' - only to discover that he's turned one of their own against them! You'll also be missing Black Canary vs. Ivy! Batgirl vs. Starling! Katana versus… well, that would be spoiling things, wouldn't it? BIRDS OF PREY #7: The comic for people who think there's not enough fighting in comics.