an issue of Frankenstein: Agent of Shade by DC Comics 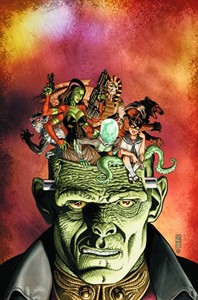 NM Price:
$2.99
Release Date:
10/12/2011
Issue not yet rated - You rated this a 0
Previous Issue Next Issue
Issue description
Writer: Jeff Lemire Alberto Ponticelli
It's all-out war as Frankenstein and his new field team, The Creature Commandos, uncover an age-old conspiracy at the heart of Bone Lake - one that will see them suit up as the world's first 'Necronauts,' traveling between worlds and through 'dead space,' toward the mysterious Monster Planet. Meanwhile, the horrifying origins of the Commandos are revealed - and the S.O.M.B.I.E. makes its first appearance!