an issue of Avengers: Children's Crusade by Marvel Comics 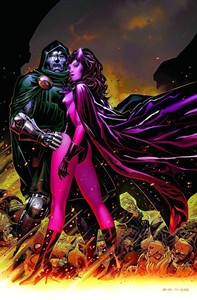 NM Price:
$3.99
Release Date:
9/21/2011
1 rating - You rated this a 0
Previous Issue Next Issue
Issue description
Writer: Jim Cheung Allan Heinberg
IT'S THE AVENGERS VERSUS THE X-MEN - with the Young Avengers and X-Factor caught in the crossfire -- as all four teams battle to determine who will hold the Scarlet Witch responsible for her crimes. Plus, when the origin of the Scarlet Witch's godlike powers - and the secret history of her murderous rampage in 'Avengers: Disassembled' -- are finally revealed, the truth creates a rift among the members of the Young Avengers that the team may not survive.