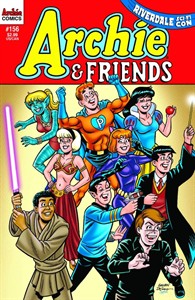 NM Price:
$2.99
Release Date:
6/15/2011
Issue not yet rated - You rated this a 0
Previous Issue Next Issue
Issue description
Writer: Schlagman Adam Bill Galvan
'The Great Riverdale Comic CON.' The gang converges at the first-ever Riverdale Sci-Fi Convention and find themselves entered in an epic costume contest - but who's the mysterious robot trailing them? And can Veronica win the top prize when an old rival shows up in the same costume? It's a pop culture explosion of fun as the Archies, Sabrina, Josie, and more cross paths at the biggest entertainment event Riverdale's ever seen!