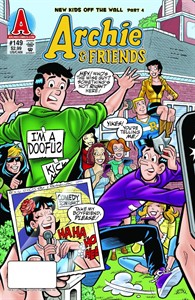 NM Price:
$2.99
Release Date:
11/10/2010
Issue not yet rated - You rated this a 0
Previous Issue Next Issue
Issue description
Writer: Dan Parent Alex Simmons
'Prankenstein & the Twitters': The invasion of the 'New Kids' continues with Part Four… and this time the joke's on Reggie as he matches wits with a mysterious new prankster! Meanwhile, Jughead somehow attracts a twittering female fan club while Ethel discovers a previously hidden talent that has the new kids all a-twitter!