an issue of Assassin's Creed: The Fall by DC / Wildstorm 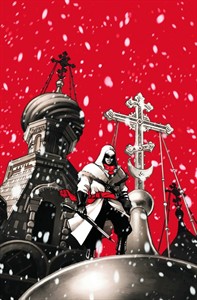 Issue not yet rated - You rated this a 0
Previous Issue Next Issue
Issue description
Writer: Karl Kerschl Cameron Stewart
The monster-hit, historical fantasy/sci-fi Assassin's Creed video game from Ubisoft breaks into comics with a stunning 3-issue series written and illustrated by acclaimed creators Karl Kerschl (WEDNESDAY COMICS, ADVENTURES OF SUPERMAN) and Cameron Stewart (BATMAN AND ROBIN)! ASSASSIN'S CREED: THE FALL follows 19th century Russian assassin Nikolai Orelov as he strives to claim an artifact of immense power from the hands of the Templars, leading to a climactic and violent showdown with the ruthless Tsar Alexander III aboard a speeding train! Meanwhile, in modern times, a troubled young drifter copes with unsettling visions of a possible past life - visions that have irreversible consequences for the present. ASSASSIN'S CREED: THE FALL is an exciting new chapter in the popular series that no fan will want to miss!