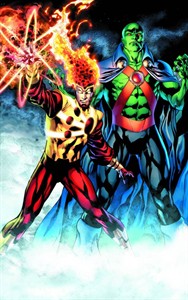 NM Price:
$7.99
Release Date:
11/10/2010
Issue not yet rated - You rated this a 0
Crossovers
Brightest Day
Previous Issue Next Issue
Issue description
Writer: Bryan Hitch Dan Jolley Warren Louw John Ostrander
Spotlighting Martian Manhunter and Firestorm - two heroes who returned after BLACKEST NIGHT as the BRIGHTEST DAY dawned in the DC Universe! First, Blue Beetle and Booster Gold guest star in a story from MARTIAN MANHUNTER #24, while three travelers seek answers on Mars in the distant future in a tale from issue #11. Then, in an epic from FIRESTORM #11-13, Jason Rusch and Ronnie Raymond clash for the first time as they battle some of their greatest foes.