an issue of Astonishing Spider-Man / Wolverine by Marvel Comics 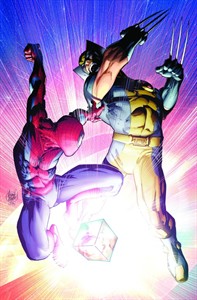 NM Price:
$3.99
Release Date:
9/15/2010
Issue not yet rated - You rated this a 0
Previous Issue Next Issue
Issue description
Writer: Jason Aaron Adam Kubert
Wolverine and Spider-Man have gone from the dawn of time to the end of time. Now they're stuck in the future, which would be so bright were the sun not eclipsed by DOOM: THE LIVING PLANET! Not only did Dr. Doom conquer our planet, but he also conquered Ego: The Living Planet and is back to finish the job on Earth. Only Wolverine and the Phoenix Gun stand in his way. All this, plus a shocking end that will change the way you look at the two biggest Marvel characters, thanks to Jason Aaron (WOLVERINE, PUNISHERMAX) and Adam Kubert (ULTIMATE X-MEN, HULK).