an issue of Boondock Saints: In Nomine Patris by 12-Gauge Comics 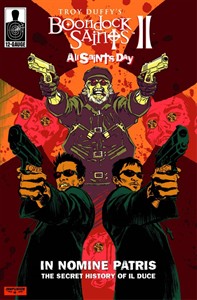 NM Price:
$3.99
Release Date:
5/26/2010
Issue not yet rated - You rated this a 0
Previous Issue Next Issue
Issue description
Writer: Schlagman Adam Rich Buckler Greg Larocque
Following the recent theatrical and DVD releases of The Boondock Saints II: All Saints Day, this all-new limited series marks the first official story to take place outside of the cult-hit films. Written by the films' creator/writer/director, this series makes the perfect companion to the movies. Conceived as a 'deleted and extended sequence', the comics expand on the story and characters in All Saints Day and delve deeper into the secret origin of the 'Original Saint,' Il Duce. Join the McManus Brothers as they uncover the full extent of their family's legacy of violence, leaving a path of vengeance in their wake!