Age of Reptiles: The Journey #1

an issue of Age of Reptiles: The Journey by Dark Horse 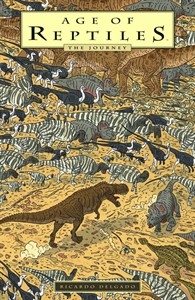 NM Price:
$3.50
Release Date:
11/4/2009
Issue not yet rated - You rated this a 0
Previous Issue Next Issue
Issue description
Writer: Joelle Jones
Dawn breaks over a sprawling forest in Cretaceous North America-a dawn far colder than its peaceful, forest-dwelling herbivores are used to. The seasons are changing, and it's time for the able-bodied to migrate south. But the trek is a dangerous one even when massive herds band together, for while there is safety in numbers, numbers also draw attention, and the carnivores are moving in! This journey may not last long when the first hunter arrives, a ferocious tyrannosaurus rex who has her sights set on a young triceratops! o Ricardo Delgado-a prolific development and storyboard artist who has worked on such hit films as Men in Black, The Incredibles, WALL-E, X-Men Origins: Wolverine, and the Matrix series-returns once again to his critically acclaimed, Eisner Award-winning comic series, Age of Reptiles!