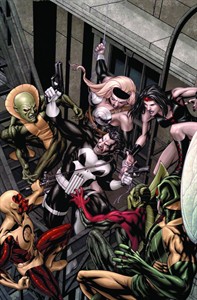 NM Price:
$3.99
Release Date:
6/17/2009
Issue not yet rated - You rated this a 0
Previous Issue Next Issue
Issue description
Writer: Tan Eng Huat Rick Remender
Russ Manning Award winner Tan Eng Huat (GHOST RIDER, SILVER SURFER) joins critically acclaimed writer Rick Remender (Fear Agent) in chronicling Frank Castle's war against Osborn's Cabal as the corrosive affects of their 'Dark Reign' further degenerates the Marvel Universe. The Hood's crime organization has infected the entire world, and nowhere is it more prevalent than the street of New York where, hidden within the decaying husks of abandoned buildings, the Hood has built his secret empire out of everyone's sight… including Norman Osborn's. The Punisher is the one man standing between the new kingpin of crime and total domination, but in order to save his city from the decay and corruption, Frank Castle will first have to survive the rage of-- THE DEADLY DOZEN!