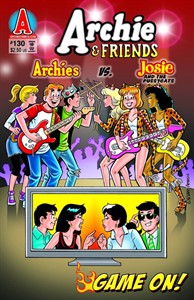 NM Price:
$2.50
Release Date:
4/8/2009
Issue not yet rated - You rated this a 0
Previous Issue Next Issue
Issue description
Writer: Rock Baker Bill Galvan
'Zero to Rock Hero,' Part 1. It's a battle of the bands unlike any seen before, when The Archies and Josie and the Pussycats compete against one another playing the hottest new video game, Legendary Rock Heroes, at Veronica's swank party! Can the real rockers excel in the virtual world as well as they rock out in the real world? And what will happen when the media, specifically a reality show producer friend of Mr. Lodge, and the whole world takes notice?