an issue of Justice League Adventures by DC Comics 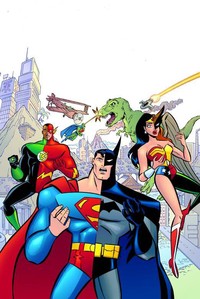 NM Price:
$2.25
Release Date:
3/3/2004
Issue not yet rated - You rated this a 0
Previous Issue Next Issue
Issue description
Writer: Aluir Amancio Matt Howarth Rob Leigh
Seattle and Tokyo are under siege by a mysterious menace! Buildings and people are physically merged together, simultaneously coexisting in the same space. When the mysterious menace threatens to spread his "simultaneous effect" across the globe, only the combined might of the Justice League can hope to stop things before it's too late!