an issue of Jack the Lantern by Castle Rain Entertainment 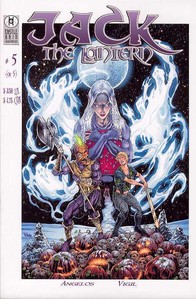 Jack, who has now made his first change into the body of Argotakar, now face to face with Roman. With Lisa gravely injured in her battle with Roman and London Dirk's security forces making there way to the battle, Jack's mind is overcome with the full power of his fear and rage. Features four pin-up pages featuring new characters.