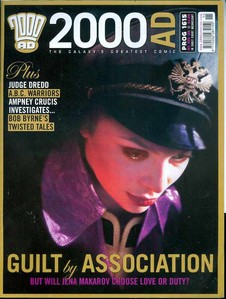 NM Price:
$4.50
Release Date:
1/7/2009
Issue not yet rated - You rated this a 0
Previous Issue Next Issue
Issue description
Writer: Various
The UK's award-winning SF anthology comic explodes with excitement as every story comes to its thrilling finale! The future of Russian rogue Nikolai Dante hangs in the balance in 'Prisoner of the Tsar' by Robbie Morrison (The Authority) and John Burns (The Avengers); Ampney Crucis is trapped in a green hell in 'Vile Bodies' by Ian Edginton (Scarlet Traces) and Simon Davis (Stone Island); and Judge Dredd is at the mercy of a time-travelling psychopath!