an issue of Patsy Walker, Hellcat by Marvel Comics 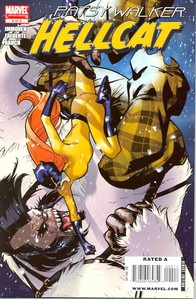 NM Price:
$2.99
Release Date:
12/24/2008
Issue not yet rated - You rated this a 0
Previous Issue Next Issue
Issue description
Writer: Kathryn Immonen David LaFuente
Hellcat is still on the case, tracking the missing heir of an Eskimo witch coven. But hot on the trail of Pete the Yeti, whose rocket powered spruce is making her life difficult. But with the aid of a giant magical wolf named Manslayer and a giant talking Mayan calendar made of stone, she just might survive her trek through the last frontier. If she doesn't drown in a wave of snow bunnies first.