an issue of Captain America Vol 5 by Marvel Comics 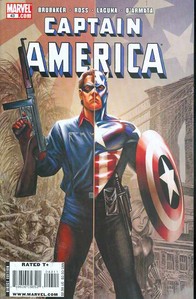 NM Price:
$2.99
Release Date:
10/22/2008
1 rating - You rated this a 0
Previous Issue Next Issue
Issue description
Writer: Ed Brubaker Luke Ross
Bucky has survived his first major trial as the new Captain America, but now a villain from his past - both as Bucky in WW2 and as the Winter Soldier during the Cold War - has come to the U.S. and he'll have to face his history just as he's finding his feet in the present. The beginning of a gripping war and espionage tale, with some familiar faces for long-term Cap readers, as the New Captain America moves further into the Marvel U. And for this action-packed three-part story, award-winning Cap writer Ed Brubaker is joined by acclaimed artist Luke Ross (Jonah Hex, Samurai).