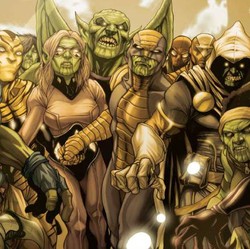 NM Price:
$2.99
Release Date:
9/24/2008
Issue not yet rated - You rated this a 0
Previous Issue Next Issue
Issue description
Writer: Christos N. Gage Dan Slott Harvey Tolibao
SECRET INVASION TIE-IN NEW CLUES TO MUTANT ZERO'S IDENTITY AND AN AVENGER RETURNS! Camp Hammond has been overrun, not just by the occupying Skrull army, but by the SKRULL QUEEN, herself! Well guess what? That's just what the SHADOW INITIATIVE wanted! Join MUTANT ZERO, TRAUMA, BENGAL, CONSTRICTOR, and ANT-MAN as they try this war's most dangerous mission: to take out the SKRULL-SPIDER-WOMAN! That IS why you stayed behind, right ANT-MAN? Also: As 3-D MAN and the KILL KREW carve a green, bloody swath across America, their numbers continue to grow. And in this issue, a classic AVENGER signs up-- and joins the AVENGERS: INITIATIVE ongoing cast!