an issue of Dean Koontz's Frankenstein by Dabel Brothers Productions 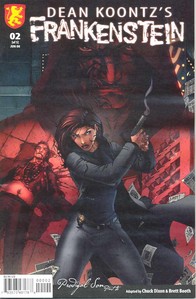 NM Price:
$2.99
Release Date:
6/18/2008
Issue not yet rated - You rated this a 0
Previous Issue Next Issue
Issue description
Writer: Brett Booth Chuck Dixon
A serial killer known as 'The Surgeon' has been stalking New Orleans, taking internal organs from his male victims and body parts from the females. But now, detectives Carson O'Connor and Michael Maddison have found themselves faced with an even weirder wrinkle as they investigate the home of a victim that's painted entirely black - and decorated with razor blades! Meanwhile, Deucalion arrives in the city to find that his creator is alive and well, living under the name of Victor Helios. Under his new guise, Deucalion's creator continues to bend the laws of science and humanity, unleashing a new brand of terror on the unsuspecting citizens of New Orleans!