an issue of Best of the West by AC Comics 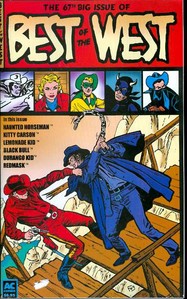 NM Price:
$6.95
Release Date:
5/28/2008
Issue not yet rated - You rated this a 0
Previous Issue Next Issue
Issue description
The 1950's proved the height of interest in Western material in the media, and these great comic book features culled from that halcyon era are among the best ever produced in that genre. Six of the 1950's best vintage cowboy comics are reprinted: Lemonade Kid by Bob Powell in 'No Locks For Murder,' Black Bull by John Severin and Bill Elder in 'One Man Posse,' Redmask by Frank Bolle in 'The False Alarm Crimes,' Haunted Horseman by Dick Ayers in 'The Death Flame,' Kitty Carson by Powell, plus Durango Kid by Joe Certa.