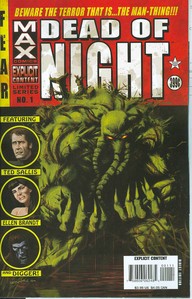 Issue not yet rated - You rated this a 0
Previous Issue Next Issue
Issue description
Writer: Roberto Aguirre-Sacasa Kano Kang
Biochemist Ted Sallis and his team are on a mission: To recreate the serum that spawned the world's first super-soldier. But like the swamp itself, there are dangers lurking beneath the surface...Ted's partner Eric, his girlfriend Ellen, the government, terrorists...everyone wants what Ted has, but what Ted doesn't realize is...the swamp itself may want him! A radical re-imagining of the Man-Thing's origin begins here, in a horror-tinged tale narrated by Digger, keeper of the Tower of Shadows!