an issue of GI Joe: America's Elite by Devil's Due Publishing 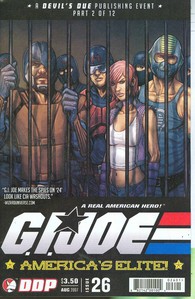 NM Price:
$3.50
Release Date:
8/8/2007
Issue not yet rated - You rated this a 0
Previous Issue Next Issue
Issue description
Writer: Mike Bear Mark Powers
WWIII Part 2 (of 12)—The new campaign against Cobra is paying off as prisons are bursting with captured Cobra operatives! In the midst of the team’s success, the war gets personal. Firefly is back and “bad blood” doesn’t even begin to describe things! Plus: the fuse has been lit… The war is about to explode!