an issue of Batman: Knightwatch by DC Comics 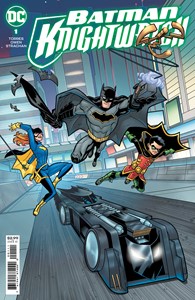 Cover Price:
$2.99
Release Date:
9/6/2022
Issue not yet released
Previous Issue Next Issue
Issue description
Writer: J. Torres
Artist: Marcelo Dichiara
After a massive breakout at Arkham Asylum, Batman and his team are on a mission to bring all the escapees back. First on the list is Clayface! Using social media, Batgirl taps into an informal network to track the villain throughout the city. This inspires Penny-One to create a more organized network of informants and spies called Knightwatch!