an issue of Amazing Spider-Man (1999) by Marvel Comics 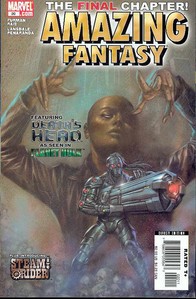 Peter Parker’s trip to Washington with his boss Tony Stark has been a real doozy. As if suffering politicians who want to impose all sort of new rules on guys like him isn’t enough, he’s also got to deal with the monstrous might of the Titanium Man! Good thing for Spidey, his new costume’s got some very special features...Get ready, True Believer. The clouds are quickly building on the horizon for a storm that will shake the entire Marvel Universe next month! Part 3 (of 3).