an issue of Four by Marvel Comics 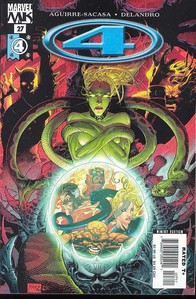 Of all the universes realms, those of magic and the occult are where the Fantastic Four are most at the mercy of their foes. Armed with a book of magic only Franklin can read, the powerless FF have one final chance to defeat the Salem Seven, the monstrous Nicholas Scratch, and the seemingly returned witch Agatha Harkness. But what role will...DIABLO play? Part 3 (of 3)