Adventure Finders: Edge of the Empire #4

an issue of Adventure Finders: Edge of the Empire by Action Lab Entertainment 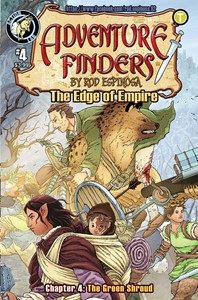 NM Price:
$3.99
Release Date:
12/4/2019
Issue not yet rated - You rated this a 0
Previous Issue Next Issue
Issue description
Writer: Rod Espinosa
Artist: Rod Espinosa
She wanted so much more than what her small town had to offer! This was the dream of starry eyed fishmonger Clariette de Artegnean. She, her cousin Jolfe Endarion, and new friend Sister Ariarra Popplevensie have now embarked on what is turning out to be a very perilous journey! Fleeing deep into the woods to escape slaughter, Clari and her small band are beset by verbolg skirmishers! Abandoned and left with few fighting men, Clari and her cousin Jolfe with Sister Ariarra and newfound ally Asogog, the gnoll warrior, they push onwards deeper into the woods! But the verbolg do not give up easily. And they are led by vicious leaders determined to wipe them out!