an issue of Brickjournal by Other Manufacturer 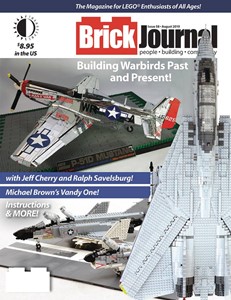 NM Price:
$8.95
Release Date:
7/24/2019
Issue not yet rated - You rated this a 0
Previous Issue Next Issue
Issue description
BrickJournal, the magazine for LEGO enthusiasts, gets into building warbirds of the past and present with a look at Jeff Cherry's World War II and modern fighters, including his P-51 Mustang and F-14 Tomcat! There's also a feature on Ralph Savelsburg's planes, including an X-plane that is a BrickJournal exclusive! (Which one is it?) Michael Brown also returns with a look at his model of the all-black F-14 Tomcat "Vandy One." Plus: "Bricks in the Middle" by cartoonist Kevin Hinkle, step-by-step "You Can Build It" instructions by Christopher Deck, BrickNerd's DIY Fan Art with Tommy Williamson, Minifigure Customization with Jared K. Burks, and more!