Curse of the Brimstone #3 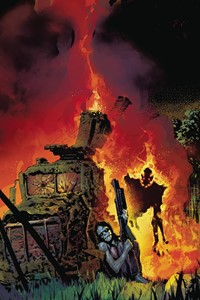 NM Price:
$2.99
Release Date:
6/6/2018
Issue not yet rated - You rated this a 0
Previous Issue Next Issue
Issue description
Writer: Justin Jordan
Artist: Philip Tan
It's tragic enough that Brimstone's town was set on fire by his own hands, but now... his father?! Turning Joe into Brimstone was just for fun - the Salesman now holds Joe's father hostage as well! Brimstone must fight the Salesman's ice creaturess, the Hound, to save his father from her clutches. But without knowing exactly what his fiery powers wield, how can Brimstone be sure he won't accidentally destroy another town... or himself?