an issue of Kong: 8th Wonder of the World Movie Adaption by Dark Horse 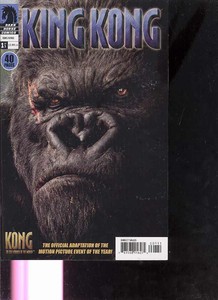 NM Price:
$3.99
Release Date:
12/21/2005
Issue not yet rated - You rated this a 0
Previous Issue Next Issue
Issue description
Writer: Christian Gossett Dustin Weaver
With disgruntled investors after his skin, director Carl Denham has one chance to make the film of his dreams—hire an unknown actress, kidnap his writer, and board a tramp freighter for the South Pacific. And Denham is the only one on board who knows their final destination: a mysterious, storm-shrouded land mass known only as the Island of the Skulls. There, Denham and his film crew will encounter hostile natives, and actress Ann Darrow will find herself in the grasp of the island’s undisputed lord and master—the mighty Kong! Based on the eagerly anticipated motion picture by Peter Jackson, this three-issue comics adaptation captures all of the action, all of the romance, and all of the terror of the 8th Wonder of the World!