an issue of Monstro Mechanica by After-Shock Comics 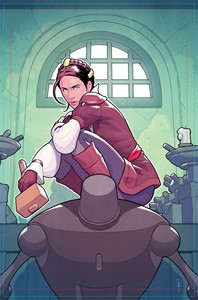 NM Price:
$3.99
Release Date:
1/10/2018
Issue not yet rated - You rated this a 0
Previous Issue Next Issue
Issue description
Writer: Paul Allor
Artist: Chris Evenhuis
In a city under siege, Leonardo da Vinci sends Isabel and the machine on a dangerous mission. But in the thick of battle, the machine starts to exhibit strange behavior, leaving Isabel to wonder if it's gaining consciousness at the worst possible moment. From creators Paul Allor (Teenage Mutant Ninja Turtles) and Chris Evenhuis (Wynonna Earp) comes this swashbuckling, historical adventure story about war, identity and the birth of the modern world!