an issue of Amazing Fantasy by Marvel Comics 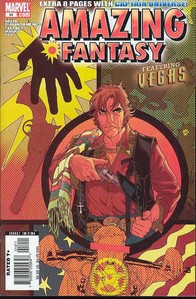 NM Price:
$2.99
Release Date:
10/26/2005
Issue not yet rated - You rated this a 0
Previous Issue Next Issue
Issue description
Writer: Carmine Di Giandomenico Jay Faerber Karl Kesel Carlos Mango
Introducing a new kind of hero named Vegas and a corner of the Marvel Universe you’ve never seen before! Welcome to the new borderland where bad guys don’t always wear colorful costumes, but that doesn’t make them any less deadly or dangerous. It’s a lesson Vegas learns the hard way when a super-powered gang, the Renegades, kills his sister. Now he’s out to even the score. Trouble is, Vegas doesn’t have any powers himself...or does he? Doesn’t matter. As far as Vegas is concerned, life’s a gamble and he always plays to win. Parts 1 & 2 (of 2). PLUS: The return of Marvel’s most unique cosmic character -- Captain Universe -- in a two-part 8-page bonus story kicking off next month’s Captain Universe Event!!!