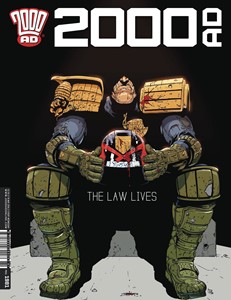 NM Price:
$15.60
Release Date:
11/2/2016
Issue not yet rated - You rated this a 0
Previous Issue Next Issue
Issue description
Writer: Various
Blazing SF action from the Eisner-nominated UK anthology! Events take an unmissable turn in the conclusion to the shocking Dredd story from John Wagner and Carlos Ezquerra; elsewhere the lineup comes to a barnstorming conclusion as Psi-Judge Anderson battles political subterfuge in "The Candidate" by Emma Beeby and Nick Dyer; the stakes are raised in the fight against the Martians in Scarlet Traces: Cold War by Ian Edginton and D'Israeli; and there's a race against global extinction in Flesh: Gorehead by Pat Mills and Clint Langley!