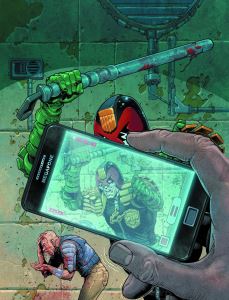 Blazing SF action from the Eisner-nominated UK anthology! Everything wraps up in the last two regular issues of the year - Dredd's reputation is on the line as the footage of a dead perp goes public in "The Beating" by John Wagner and Patrick Goddard; Kano and co learn the truth behind the Ararat conflict in Bad Company: First Casualties by Peter Milligan, Rufus Dayglo, and Jim McCarthy; and there's a war on the streets of London between the dead and the Vizards in Defoe: The London Hanged by Pat Mills and Leigh Gallagher!