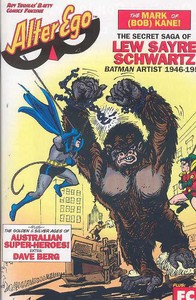 NM Price:
$5.95
Release Date:
8/10/2005
Issue not yet rated - You rated this a 0
Previous Issue Next Issue
Issue description
Features Lew Swayre Schwartz, the Golden Age artist who was Bob Kane’s ghost from 1946-1953—is interviewed by Jon B. Cooke about his Batman and other stellar work! Plus there’s Batman art by Jerry Robinson, Dick Sprang, Sheldon Moldoff, Win Mortimer, Jim Mooney, & others! Then, it’s “The Life and Death of the Australian Comics Industry—1940-1962!” Plus, the “down under” career of The Phantom, with tons of super-hero art rarely seen in the Northern Hemisphere!