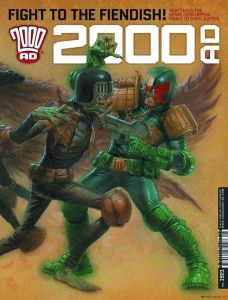 NM Price:
$26.75
Release Date:
8/26/2015
Issue not yet rated - You rated this a 0
Previous Issue Next Issue
Issue description
Writer: Various
Artist: Various
Blazing SF action from the Eisner-nominated UK anthology! Future lawman Judge Dredd uncovers a conspiracy at the heart of Emerald Isle in 'Blood of Emeralds' by Michael Carroll and Colin MacNeil, and then the cold wind of vengeance sweeps in in 'Enceladus: Old Life' by Rob Williams and Henry Flint; there's an invasion from beneath the Poison Belt in Helium by Ian Edginton and D'Israeli; Carcer comes under the influence of the Hurde in Outlier II: Dark Symmetries by T.C. Eglington and Karl Richardson; Harry Absalom is on the trail of demon hunters in 'Under a False Flag' by Gordon Rennie and Tiernen Trevallion; and the ABC Warriors return, courtesy of Pat Mills and Clint Langley, for the final flashback series, 'Return to Ro-Busters,' in which Ro-Jaws' inbuilt disobedience proves integral to robot independence!