an issue of Unbeatable Squirrel Girl (Jan. 2015) by Marvel Comics 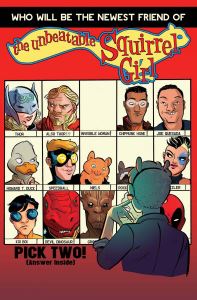 NM Price:
$3.99
Release Date:
6/3/2015
Issue not yet rated - You rated this a 0
Previous Issue Next Issue
Issue description
Writer: Ryan North
Artist: Erica Henderson
The start of a new arc! Squirrel Girl meets some potential new allies, including... GIRL SQUIRREL?? I don't know why we put question marks there; it's actually what happens! Also a hippo named 'Hippo' is in this issue! This character already existed and we absolutely did NOT make him up at the last minute! ALSO THERE'S FIGHTS!! AND EVEN SOME FEELINGS! Rated T