an issue of Helheim by Oni Press 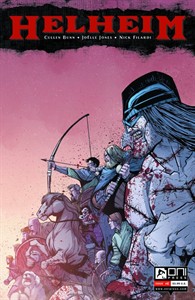 Issue not yet rated - You rated this a 0
Previous Issue Next Issue
Issue description
Writer: Cullen Bunn
Artist: Nick Filardi Joelle Jones
THE NEW SERIES FROM SIXTH GUN WRITER CULLEN BUNN AND FAN-FAVORITE ARTIST JOËLLE JONES CONTINUES! His sense of purpose renewed, Rikard takes the fight to both Groa and Bera… but he will not face the fury of the witches alone. Raising an army of fierce warriors, Rikard marches against a demonic horde. But can even the mightiest of human warriors stand against such ungodly might? Find out in a mass battle unlike anything that has been depicted in comics before! MATURE THEMES