Boondock Saints: Head of the Snake #1

an issue of Boondock Saints: Head of the Snake by 12-Gauge Comics 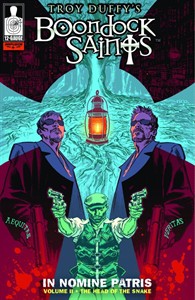 NM Price:
$3.99
Release Date:
11/10/2010
Issue not yet rated - You rated this a 0
Previous Issue Next Issue
Issue description
Writer: Schlagman Adam Rich Buckler Greg Larocque
Noah and Louie begin to make serious, bloody waves in New York's 1960s Underground Crime world. A horrible 'accidental' death in the neighborhood leads Noah to choose a particularly problematic target, while and Louie's job as 'planner' begins to change their relationship - but for better or worse? What were Connor and Murphy up to between the original film and the sequel? Troy Duffy reveals some of their past in Ireland during 'the missing years' as a shared tale of tragedy brings back memories that are better off left buried.