an issue of Hoverboy by Metallic Rose Comics 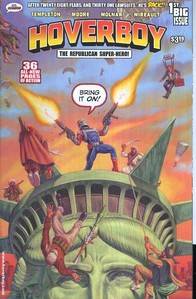 NM Price:
$3.99
Release Date:
7/23/2008
Issue not yet rated - You rated this a 0
Previous Issue Next Issue
Issue description
Writer: Stephen Molnar Ty Templeton
The greatest hero of the Twentieth Century is back! Hoverboy, the Republican super-hero, and star of comics, films, cartoons and toys, is returning to the media that spawned him, in an all-new adventure by Eisner Award winning writer/artist Ty Templeton (Howard the Duck, The Exterminators, The Simpsons) and Steve Molnar (Avengers Adventures). With special appearances by George Bush, John McCain, and his Republican All-Stars, this is the Hoverboy comic to own!