an issue of Walking Dead by Image Comics 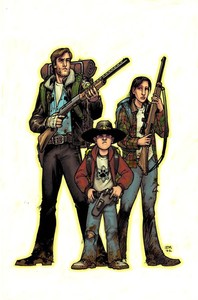 NM Price:
$175.00
Release Date:
12/10/2003
Issue not yet rated - You rated this a 0
Previous Issue Next Issue
Issue description
Written by Robert Kirkman; illustrated by Tony Moore.

How many hours are in a day when you don't spend half of them watching television? When is that last time any of us REALLY worked to get something that we wanted? How long has it been since any of us really NEEDED something that we WANTED? The world we knew is gone. The world of commerce and frivolous necessity has been replaced by a world of survival and responsibility. An epidemic of apocalyptic proportions has swept the globe, causing the dead to rise and feed on the living. In a matter of months society has crumbled, no government, no grocery stores, no mail delivery, no cable TV. In a world ruled by the dead, we are forced to finally begin living.

This Issue: Rick Grimes' horrific adventure continues. Reunited with his family, his focus shifts from survival to protection. It's one thing to know that you have to watch your back every second of every day. It's another thing entirely to have to worry about losing your family in the blink of an eye. Rick's life has changed dramatically in the last couple months and so far, he's learned to deal with it... but is he finally starting to crack? From the guys behind BATTLE POPE and BRIT comes something COMPLETELY different.