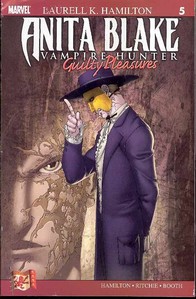 NM Price:
$2.99
Release Date:
3/21/2007
1 rating - You rated this a 0
Previous Issue Next Issue
Issue description
Writer: Brett Booth Laurell K. Hamilton Stacie M. Ritchie
Anita Blake has become deeply involved in a murder mystery that threatens to shake the foundations of the vampire underworld of St. Louis, and she's not about to let the roadblocks she's encountered thus far stop her from solving the case. But she won't be able to do it alone - she's going to need the help of Phillip, a vampire junkie who can help her gain access to people and places she'd never be able to enter on her own. including a special vampire party where hunters like herself are definitely not welcome. Masterfully adapted from the novel by New York Times Best-selling Author Laurell K. Hamilton, ANITA BLAKE, VAMPIRE HUNTER offers a thrilling ride through a world where vampires, werewolves and other creatures of the night are legal citizens of the United States and where hunters like Anita Blake are called in whenever things get out of hand. Discover why this title is already being called the "surprise hit of 2006" by readers and critics alike!