an issue of 2-Land Season One by 2-Land Comics 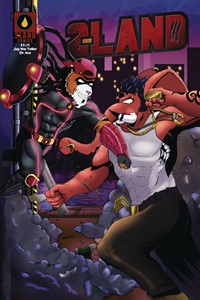 NM Price:
$10.00
Release Date:
9/7/2022
Issue not yet rated - You rated this a 0
Previous Issue Next Issue
Issue description
Writer: Jay the Teller
Artist: Dr.Inx
The city of Tuland has been very active lately. There has been a spike in low level crime, political confusion as well as a looming feeling as if there is a puppet master dictating these seemingly petty crimes. On top of all of this the city has a mysterious new hero. No one has seen him. No cameras have caught him in action. And the only witnesses of his presence are the criminals. Will Tuland's streets return to their once peaceful norm? Is there a so called "puppet master" pulling the strings behind these criminal activities? Will this self-appointed savior of Tuland reveal himself to the people?