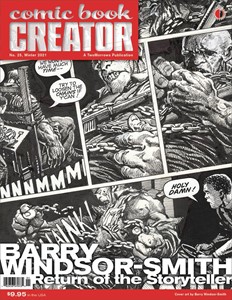 NM Price:
$9.95
Release Date:
7/28/2021
Issue not yet rated - You rated this a 0
Previous Issue Next Issue
Issue description
Writer: Various
Comic Book Creator features "The Return of the Storyteller," as we conduct an in-depth discussion with the legendary comic book artist and illustrator Barry Windsor-Smith about his mammoth new graphic novel, Monsters, a tour de force decades in the making! We delve into the epic's origin as an Incredible Hulk one-shot back in the mid-1980s and its subsequent evolution into perhaps BWS's magnum opus, a 300-plus page saga about rage, revenge, and forgiveness. Also included is a gallery of rare out-takes from Monsters.