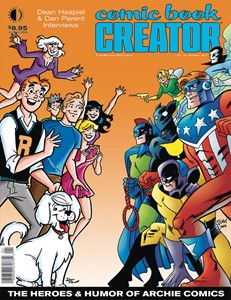 NM Price:
$8.95
Release Date:
2/14/2018
Issue not yet rated - You rated this a 0
Previous Issue Next Issue
Issue description
Writer: Various
This issue visits Riverdale High, U.S.A., to celebrate America's Typical Teenager Archie and his pals 'n gals-as well as the mighty MLJ heroes of yesteryear and those of today's "Dark Circle"-with a look at the 75-year-old comics line's wildest characters and titles. Plus we conduct career-spanning conversations with two of the imprint's hottest creators: Brooklyn's own Dean Haspiel (the Emmy-winning alternative-slash-mainstream artist who collaborated with Harvey Pekar) and Dan Parent (GLADD award-winning cartoonist and creator of the Archie universe's ground-breaking gay character, Kevin Keller), who both jam on our great exclusive cover depicting a face-off between humor and heroes.