an issue of Captain America (2012) by Marvel Comics 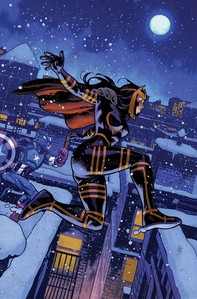 Issue description
Writer: Rick Remender
Artist: Pascal Alixe
'THE IRON NAIL, PROLOGUE: A CHOICE' Captain America, the super soldier patriot of World War II…is away! Left in his place is the daughter of criminal Mastermind Arnim Zola-Jet Black! As beautiful as she is powerful, Jet Black must learn the laws of mortal men in New York City. But when a group of Nazi soldiers known as 'The S Men,' lure Black into evil-will she follow in the footsteps of her nefarious father?