an issue of '68: Scars by Image Comics 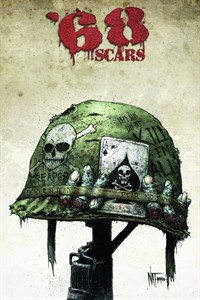 Issue not yet rated - You rated this a 0
Previous Issue Next Issue
Covers of '68: Scars #2

Issue description
Writer: Mark Kidwell
Artist: Nat Jones
In the heart of war-torn Saigon, a handful of battered survivors hold Tan Son Nhat Airport against an endless army of Viet Cong and the shambling dead. Crumbling bunkers defend the outer perimeter as inside… a seething hatred builds. And in the jungle, the desperate remainders of a deep recon SEAL team meet their luckless rescuers in the dripping shadows of a tropical slaughterhouse. As old wounds heal, new ones open… and souls are laid bare. Creators MARK KIDWELL, NAT JONES and JAY FOTOS continue their epic of military/zombie horror in this second part of the ongoing '68 series: '68: SCARS!