an issue of '68: Jungle Jim by Image Comics 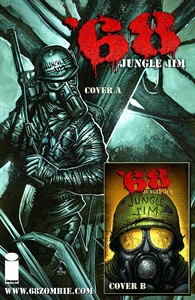 Issue not yet rated - You rated this a 0
Previous Issue Next Issue
Covers of '68: Jungle Jim #1

Issue description
Writer: Jay Fotos Mark Kidwell Nate Van Dyke
Vietnam, 1968: Behind enemy lines, a soldier stands alone. A one-man army…armored against the risen, hungry dead under burlap, bamboo and Army green. Armored against the living with a Bowie knife and a mobile arsenal. If you got left behind…he'll find you. If you're the enemy…you'll never see him coming. If you're a zombie…he'll kill you again. Sometimes, to slay monsters…you have to become one yourself. Jungle Jim is a stand-alone one-shot comic story set in the grim world of '68. Meshing smoothly with the ongoing military horror series, Jungle Jim is a savage new slant on the Vietnam/Zombie apocalypse scripted by MARK KIDWELL with stunning artwork by NATE VAN DYKE and JAY FOTOS.