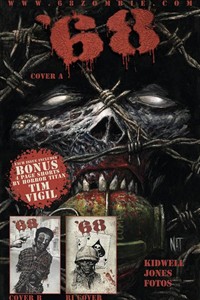 Issue description
Writer: Jay Fotos Nat Jones Mark Kidwell Tim Vigil
On February 13, 1968, during the darkest days of the Vietnam conflict, the gates of hell opened wide, unleashing new and hungry life into the countless war-torn dead. The horrors of war take a back seat as an American tunnel rat crawls into a Viet Cong warren turned undead slaughterhouse, rotting snipers fire their final bullets from treetop perches, and freshly filled body bags twitch and rise from the slab. There are zombies in the razor wire… Horror comics creators Nat Jones, Mark Kidwell and Jay Fotos return to the jungles of Vietnam, expanding the zombie epic started in the original one-shot '68 with this four-issue mini-series of undead military horror. Each issue features multiple covers by Jones and Fotos, full 22-page stories in series continuity and a bonus 4-page short that expands on the zombie-infected world of 1968 by horror titan Tim Vigil. Welcome to 1968… and the end of the world.