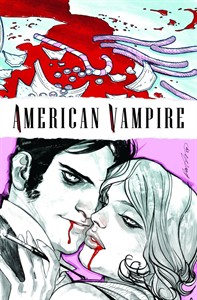 Issue description
Writer: Rafael Albuquerque Stephen King Scott Snyder
The era of the American vampire officially begins as Pearl Jones declares war on the powerful coven of vampires that ended her life, and Skinner Sweet declares war on, well, everyone! Scores will be settled in blood in this installment, the third of five over-sized issues featuring stories by author Scott Snyder and the master of horror himself, Stephen King.