an issue of Days Missing by Archaia Studio Press 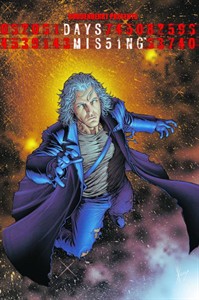 Issue description
Writer: Ian Edginton Lee Moder
The Large Hadron Super Collider is about to go operational. Humanity is poised to re-create the same conditions that resulted in the Big Bang and the birth of the universe. Physicist Kate Prosper notices something in one of the tests, a temporal anomaly with no reasonable scientific explanation. Meanwhile, Alain Murais would do anything to save his dying son, who is suffering from leukemia. But he's out of money, insurance and time. Kate and Alain's paths will collide not only with one another, but also the mysterious Steward! Available with a regular cover by Dale Keown, and a 1-in-4 chase cover by Frazer Irving.